”The Anatomy Of Story is concrete and practical without resorting to simplistic ‘Three Act Structure’ screenwriting clichés. It will be an indispensable guide to writing your first great script.” —Larry Wilson, co-writer /co-producer of Beetljuice and co-writer of The Addams Family

THE ANATOMY OF STORY

22 STEPS TO BECOMING A MASTER STORYTELLER 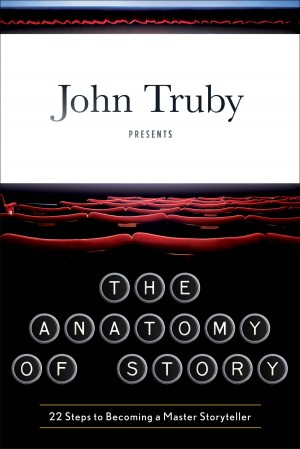 Faber & Faber launches John Truby’s The Anatomy of Story: 22 Steps to Becoming a Master Storyteller—a new Bible not just for screenwriters, but for any writer crafting the perfect story.

Taking as his examples Jaws, Adventures of Huckleberry Finn, Tootsie, The Great Gatsby, The Godfather, Chinatown, and A Christmas Carol, among many others, Truby illustrates in The Anatomy of Story (Faber & Faber/Farrar, Straus and Giroux) what makes a great story and how to create that story, focusing on plot and premise, theme, characters, moral development, and crafting the kind of ending that brings readers and audiences back again and again. Additionally, Truby offers seven key story structure steps, which are the major stages of a story’s development and of the dramatic code under its surface. The Anatomy of Story is a step-by-step guide to constructing the best story possible—be it a screenplay, short story, or novel.

Truby, who has taught his twenty-two-step Great Screenwriting and Genre classes to more than 20,000 students worldwide, is available to discuss:

“ Hollywood story consultant Truby commits his vast knowledge of screenwriting and storytelling to the page in this handy guide for aspiring writers of all types. Truby delves into the setup, from basic structure to the premise and the depth behind it. From there, he moves into character, emphasizing the importance of not only the hero but also the characters in the story who aid and oppose him. Truby illustrates the importance of setting to the story and how careful plotting is needed to weave the elements of the story together. He cautions that plot is not incidental and requires careful management and timely revelations. Although most of his examples are from movies, such as Tootsie, The Godfather, and Star Wars, Truby also draws from novels and plays, and his advice is applicable not only to the hopeful screenwriter but to the aspiring novelist as well. A comprehensive guide to writing stories of all kinds, Truby’s tome is invaluable to any writer looking to put an idea to paper.”