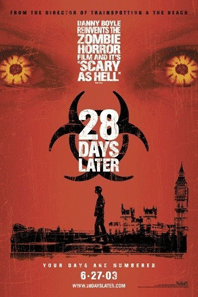 Horror is consistently the most popular of all genres. And it is the cheapest type of film to make, so it is the form of choice for indie writers and directors. The problem is that horror is also the lowest form, typically devoid of story. So the question becomes: How do you write a horror script unique enough to sell that will also set you apart as a talented storyteller?

To answer that question I took a look at one of the best horror films of recent years, 28 Days Later. Writer Alex Garland succeeds by knowing the form so well he is able to twist some of the key beats to give the traditional zombie story new life.

Mastering the horror genre is more difficult than it appears. You may be surprised to learn that it has more specialized story beats than any other form. So while horror is usually done in the most simplistic way possible – as a killing machine on a rampage – it doesn’t have to be.

Horror always shows people being reduced, to an animal or a machine, the lowest levels a person can become short of death. In effect, this genre shows us human devolution. Horror puts character under the most extreme pressure of any form. So it focuses totally on one emotion, fear.

Bad horror plays that one note of fear again and again, and the story is nothing more than permissible sadism. Good horror takes this reduction of characters and makes it positive. It asks: What is human? And can this human quality be maintained in a world where everyone is desperate and induced to be an animal, ie going beyond even immoral behavior to amoral behavior? In short, good horror creates a recognizable human world where people are morally tested in the extreme.

The writer of 28 Days Later understands the crucial requirements of good horror, and he executes them within the parameters of a low budget film. In the set-up, the hero, Jim, wakes up from a coma to find himself in an empty, trashed hospital. Outside, the streets of London are just as deserted. He’s walking around in a giant ghost town (no extras to run up this budget).

After meeting up with a couple of other survivors, Jim learns the rules of this new world. Stating the rules of the world is one of the specialized story beats in horror, not only because it tells the hero how to survive in this unique horror world, but also because it suggests to the audience how humanity will be tested. Here, there are two rules: 1, never go anywhere alone and 2, only travel in daylight. One of the survivors, Selena, tells Jim, “Plans are pointless. Staying alive is as good as it gets.” This is not only the key line in this film, it is the key line in any horror film. From now on, we will see if human behavior is possible or if base animal survival is all we really are.

Garland quickly gives his survivors a desire line, which is to reach a makeshift military outpost some miles away. The characters go on a journey where they defeat a number of attacking zombies. This is typical horror — giving the audience a few terrifying fights — and pays the dues of the form.

But then Garland kicks the story up to a higher level, and the film becomes much more interesting. The hero and his allies reach the outpost, a fortified English mansion, and apparent safety. But of course this is another of horror’s unique story beats: the place of final refuge is actually the place of greatest horror (for a breakdown of all 15 story beats, see the Horror, Fantasy, and Science Fiction Class or the Blockbuster Horror Software). Our hero soon learns that the platoon plans to rape the women and when he protests, they take him off to be murdered.

Now Garland can compare two kinds of animal: the zombies may be rabid dogs but the soldiers are merciless pack animals who have chosen to discard their humanity in a totally rational, pre-meditated way. A storm hits and the mansion becomes a kind of haunted house where a battle rages between the hero, the soldiers and the zombies. And it becomes impossible to tell who is the most savage.

A lot of horror is laughably silly. But don’t underestimate this form. It is the best strategy for writing a breakthrough script. And if you learn the genre well enough, you can write a horror picture that is a powerful, and respected, piece of storytelling.

How to Write the Horror Genre

"This guy is the best script doctor in the movie industry, and this program makes you tell a good story whether you want to or not. A winner. If you even toy with the idea of storytelling, you must have Truby’s Blockbuster. Highly recommended."