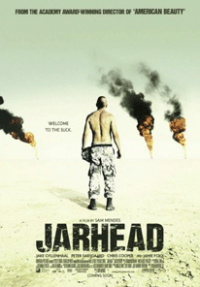 Jarhead shows maleness in the extreme better than any film I’ve ever seen. And yet it is painfully dull.

The reason is found in the most basic of all story structure steps, the desire line. The hero and his fellow soldiers all want to shoot someone, and they go the whole movie and the whole Gulf War without doing so. This film is one humongous stall. And without a desire line, there is no plot.

Click here to learn about Truby’s ACTION SOFTWARE CLASS which helps you structure and write a great Action script.

Of course the writer would argue that this is all part of the theme. He purposely deprives these kill-happy guys of their climax to show how self-destructive it is being a killer. Unable to climax, they burn themselves up with kill lust. From the beginning, these Marines have their guns all cocked with nowhere to go. So by the end, unable to shoot their weapons at a human being, they join in a final bacchanalia in the desert and are reduced to firing their automatic weapons impotently into the air.

Click here to learn about Truby’s ACTION AUDIO CLASS which helps you structure and write a great Action script.

But that makes the story two hours of proving a thesis. Two hours of shoving the audience, one scene after another, into extreme maleness. Some of these scenes are brutal, some are hilarious. But it’s always the same beat. And the audience is the anvil.

How to Write the Action Genre


"This course is so good I took it twice."