Spoiler alert: this breakdown divulges information about the plot of the film. 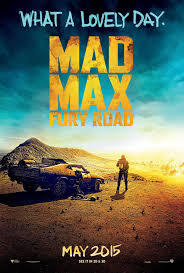 Mad Max: Fury Road is nuttier than a fruitcake. It’s also the second best Action movie in history, behind Seven Samurai, which happens to be the best movie ever made. Fury Road doesn’t have anywhere near the scope or complexity of Seven Samurai. But its narrative drive (literally) is off the charts, with 120 minutes of almost non-stop, hand-to-hand combat on top of a speeding bullet.

When Mad Max 2: The Road Warrior came out in 1981, it marked a revolutionary jump of narrative speed, not just for Action movies but for popular film worldwide. Popular filmmaking would not look back. Given the nature of the cinematic medium and the mass market economic model by which film is made and sold, this jump in narrative speed dictated two major effects: popular film would be based primarily on the Myth and Action genres, and plot would become progressively more dense.

That is precisely what has happened and any screenwriter who wants to compete in today’s marketplace must accept this truth and excel in these two story areas.

So what is the deep pleasure of the Action form? Action, and Fury Road in particular, celebrates the warrior. Much as some of us, myself included, want to believe that the last thing we need to glorify right now is the warrior, when you see warriors with this kind of bravery and physical skill, you can’t help but feel pure awe.

A lot of the joy in watching these warriors comes from the brilliance by which George Miller directs the battle scenes. There has never been a director in the history of cinema with this ability to film action, especially hand-to-hand combat.

But the artistry of the Action form in Fury Road also comes from the script, which uses a modified Buddy Picture structure, in this case between a man and woman, Max and Furiosa. As in the classic Love Story, these characters begin their relationship with a fight, and it’s a really good one. We know going in that Max, as embodied by Tom Hardy, is a first class warrior. After this fight, we know Furiosa is too. And Charlize Theron is every bit as believable as Hardy.

Through necessity, Max and Furiosa create a partnership, not a friendship. Once that partnership takes form, the rest of the film is one frenzied dance where these two take on an army.

Buddy pictures, when wedded to the Action form (such as Butch Cassidy and the Sundance Kid), are all about the action dance between the two friends. The dance is the key beat in the Love Story because it shows us love played out in action. The same is true in Action Buddy films. The Sundance Kid is a helluva warrior, and it’s great fun to see him shoot the bully’s gun across the floor in the opening card scene.

But the gold of their relationship, the sweet pleasure the audience takes from them, is when they dance, when they fight as a team. Then it takes the entire Bolivian army to bring them down.

Fury Road doesn’t use another element that’s crucial to the success of Butch Cassidy and the Sundance Kid, where the two leads are a comedy as well as an action team. Instead, Fury Road heightens the action dance between the buddies. If there is a better 2-person team of warriors in film history, I can’t think of them.

The fact that one of them is female just makes it better. Not because of the romantic or sexual possibilities between them, since there are none. The male-female distinction allows us to watch the mutual respect slowly unfold between them, and the payoff is sweet. The fact that, as a great warrior, Furiosa is fighting for women, who couldn’t be more abused in this animal hell, just makes her more complex and appealing.

For writers of the Action form, the question arises: is there one technique that makes all of this possible? Not surprisingly, it’s in the story structure.

Fury Road’s structure is simple and classic Action: a straight line run and back. And I do mean run. This simple spine is crucial to the power of the film, because it supports all the amazing action set pieces, the spectacular story world, and the slowly developing relationship between the leads (for all the techniques of great Action writing, see the Action Class).

One of the basic principles of story, true in every genre, is: the more you want to “hang” on the story, the simpler the structure must become. An element you hang on a story is anything that doesn’t move the story forward, that doesn’t contribute directly to the hero’s desire. Action set pieces, which are all about appreciating the warrior’s physical skills in the present, are a perfect example. So is exploring the story world, which has become one of the most important trends in worldwide popular storytelling in the last ten years.

But here’s the rub of simple structure. Because the structure is a straight line run, the plot is simple as well. Weak plot is probably the biggest flaw in most Action films. It’s not a problem here for a few reasons. First, the narrative drive is so intense the audience doesn’t have time to grow bored. Second, the writers excel in micro plot, coming up with infinitely new ways for the opponents to attack the heroes. Third, instead of the repetitive plot we often get with the classic Myth story, where the hero overcomes a succession of unconnected opponents on the path, here the plot develops organically because the heroes battle the same opponents in an accelerating punch-counterpunch.

Fury Road is a landmark movie for another reason: it’s the best depiction of dystopia in film history. That’s saying a lot. From Metropolis to Blade Runner, from Lord of the Rings to Hunger Games and so many more, there have been some great dystopian visions, which no medium can express as well as film can.

Like these other movies, Fury Road’s vision of hell shows the land, people and technology badly out of balance. Here, an arid wasteland is populated by human savages competing to the death for scarce resources like water and gas. A ruthless tyrant enslaves the masses. Women especially are degraded, used as “breeders.” All of this is beautifully realized, but we’ve seen it many times before.

So why is this vision of hell the best? Because Fury Road is 120 minutes of hell in your face. This is hell expressed through story, at top speed. Those other dystopian visions we can watch from the comfort of our seats. But in Fury Road, we’re living that hell ourselves. No escape. We are Max chained to the front of that vehicle in a war that never ends. The story is constantly demanding: tell me, how does it feel?

Everything about this movie is primal: the muscle-laden male warriors, the female “breeders,” the non-stop battles, the supermodels in the middle of the desert (including one played by Rosie Huntington-Whiteley), the war drummers on the back of the truck and the rock guitarist who hangs and plays from the front, the souped-up engines, the “green place,” the masses dying of thirst. The details are staggering, and they are clearly recognizable features of today’s world, which is one of the keys to good science fiction.

The primal intensity is multiplied by placing the story in the desert, an intensely sensual landscape that takes on geometric abstraction in the flatness of the never-ending sand. This is a massive field of play, death sport squared. While viewing it, the mind constantly flips back and forth between the extreme sensuality and detail of the battle moment and the epic scale and spectacle on which the battle is played.

As writers, it’s easy to be overcome by the amazing pyrotechnics of George Miller’s directing and so fail to see all the useful techniques of the screenwriting, and Action, craft. This apparently simple script accomplishes the first requirement of popular storytelling today, in all genres and all media forms: intense narrative drive. Study to see how that’s accomplished in the writing. It will give you lessons that will be useful in anything you write.

How to Write the Action Genre


"This course is so good I took it twice."