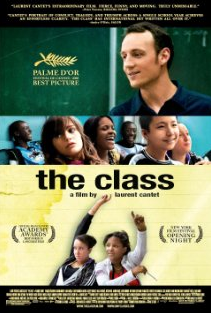 True Life stories have been very popular in books and films for many years, and are becoming more so. This genre would seem to be the easiest of all forms to write. After all, the plot is already done; all you have to do is list the events as they happened.

But this genre is actually one of the most difficult to do well, mostly because those real events put a straightjacket on the writer. If you learn how to overcome the inherent difficulties of this form, you can write a script that takes advantage of the form’s very real strengths.

The Class (Entre Les Murs), France’s entry for this year’s Best Foreign Film Oscar, is by a writer, François Bégaudeau, who seems to be well aware of the strengths and weaknesses of the genre. The result is a film that has a cumulative power recognizable by audiences around the world.

The story covers a school year in an inner city classroom comprised of 14-year-olds of every ethnic background. But this isn’t Hogwarts. And this isn’t the typical Hollywood fable of the white savior strapping the minority kids onto his or her back and carrying them to the promised land of enlightenment.

This is messy real life. So education in this classroom is more like two steps forward and three steps back. This class is full of boring assignments and petty arguments. The early part of the film highlights one of the biggest challenges the writer must solve in the True Life genre. Most of the events in real life are not dramatic, especially those portrayed in the early part of a story. But if the writer is to be successful, he or she must find a way to hit the seven key story structure steps found in every good story.

In this, writer Bégaudeau only partly succeeds. For one thing, he fails to establish at the beginning either a psychological or moral need for the teacher, only a myriad of problems he faces. This ultimately hurts the film at the end, because the teacher’s moral failing has not been set up. On the other hand, the emphasis on all the petty problems of the classroom heightens the sense that this is real, everyday life, not drama or theater.

Bégaudeau is using the technique of anti-drama here, essential in good True Life stories. Anti-drama is really a collection of techniques designed, ironically, to flatten drama in the present in order to heighten it later on. A perfect example of anti-drama occurs in The Godfather when Clemenza, who, after helping assassinate the Don’s driver, tells the gunman to “leave the gun, take the canoli.”

Even more dangerous than no defined need at the beginning of The Class is the hero’s lack of a desire line, other than the vague goal of teaching his kids. The difficulty of finding a strong, overall desire is another structural flaw common in the True Life genre. It’s also characteristic of European film in general. American movies have the strongest desire lines of any stories in the world. That’s one of the biggest reasons for their tremendous box office success. Although, to be fair, the hyper-speed desire line of many American films is also a major reason for their relative lack of depth and complexity.

The lack of overall story structure in the early part of The Class isn’t just due to the difficulties of the True Life form. It’s also part of the writer’s thematic point. He’s signaling that there will be no big change in this story, just some wins and more losses. But that puts tremendous pressure on the audience to hang in while seeing only petty dynamics. The water is heating slowly in this True Life story, but it will boil.

Much of the action in the first half of the film is taken up with students challenging the teacher’s power and their arguments about the just or unjust way he treats them. And while it is slow going, it does set up the moral issue that eventually determines the story. Slowly, a main line emerges: Souleyman, a black student from North Africa, makes trouble and can’t control himself. This emerging line immediately speeds up the narrative drive, and the focus on a growing moral problem begins to increase the scope and impact of the film.

Within this narrative line, the writer is able to show real progress in a tough classroom. When the teacher sees that Souleyman has taken powerful photos of his family and friends, he puts them up on the board so the other students can appreciate them. It is Souleyman’s high point and it’s a moment made all the more exciting for the audience because we have seen it earned in what appeared to be a hopeless situation.

The film builds to the battle scene by setting up a real life moral conundrum. Two of the students, both girls, are allowed to attend a faculty meeting. But when they misbehave, they embarrass their teacher in front of the principal and the other teachers. In class the next day, the teacher criticizes them, but then goes too far when he calls them skanks. Now the moral tables flip, with the girls having the upper hand, but he won’t back down or apologize. So they tell the class how their teacher criticized Souleyman at the faculty meeting. Souleyman explodes and bloodies a girl with his bag as he storms out. The boy is expelled and the chance for progress disappears.

One of the unique difficulties of the True Story genre is finding a natural place to end the story. Events of everyday life are steady and repetitive. Writer Bégaudeau comes up with a nice solution that kicks the story to another level but maintains its believable, real-life feel. On the last day of school, the teacher asks his students what they learned in a class that’s often about the boring but necessary work of mastering verb tenses. One of the girls he called a skank says the only thing she learned that year was from a book of her sister’s, Plato’s Republic.

The scene is a thematic revelation that highlights the deeper cause of the problem of this class and hits the audience hard at the very last moment of the film. Suddenly we realize that touching kids isn’t about being relevant, in the usual sense of talking about what’s happening right now. It’s about being deep, relevant to what it means to be a human being, of whatever race or nationality, living a life. Maybe that’s impossible to do every day in the classroom, but no matter how old the students are, it’s the only thing that works.

"Truby's 22 Steps, based on a moral understanding of the world, makes you not only a better writer but a better person."